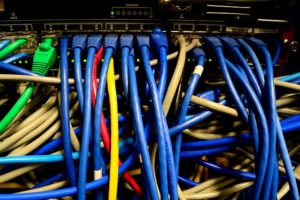 A new car is a special treat. They smell great, they run great, and they are reliable. Drive one on pothole ridden roads and you most definitely won’t get the most out of it however. Until you fix that road, the car will be shiny and new but it won’t do its job as best it can. In fact, if it had a mind of its own it would be too worried about missing ball joint crushing black (pot) holes. it may occasionally go off the road trying to avoid them. Doh!
Recently, a client was setting up a new workstation that involved fixing a network jack that no longer worked. In the old days, the sheathing on phone wire could be stripped back as far as you liked, it made no difference. Not so with Ethernet cables. In this case, there is at least 2 inches of exposed, untwisted wire before the cable is attached to the jack. You just can’t do this with data cabling.
Networks are the sum of their parts, the servers that provide, well, services, all of the computers connected to the network, the router(s), the switch(es), the printers, the scanners, and yes, the cables themselves. Let’s be clear on what a network is — if you have more than one device share, for example, an Internet connection, you have a network.
Those cables are like a road and are often forgotten. Business owners who have “gremlins” on their networks almost always dismiss them as insignificant. The twists are manufactured to precise standards to provide electrical properties that networks need to operate properly. Like a bad electrical job in your home, it may work but it’s bound to come back and bite.
Yet businesses spend money like drunken sailors on new equipment, sometimes new IT guys, and often the issue just creeps back up. Like that new car, replace the tires because the ride is rough and the new tires may ride better. It won’t last though. New tires are no match for black (pot) holes.
While I expect I’ve bored you silly by now, here’s a bit more reading, if you’re so inclined:
Unraveling the Mysteries of Twisted-Pair Cable Preparation

30 day guarantee - if your problem isn't solved on the first visit or remote session, we'll make it right, for free, or your money back.